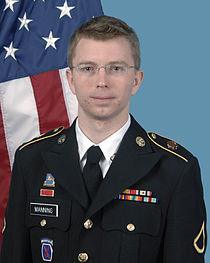 In a powerful statement read by US Army PFC Bradley Manning in court last week, he took full responsibility (and credit) for releasing documents that exposed war crimes, torture and other grim realities of US foreign policies to the whistle-blower website WikiLeaks. Bradley explained to the court, and the world, that, “I believed that if the general public, especially the American public, had access to the information… it could spark a domestic debate on the role of the military and our foreign policy in general as it related to Iraq and Afghanistan.”

Bradley detailed the depravity he saw in the ‘Collateral Murder’ video, the abuses previously unknown to Americans in the Iraq and Afghan war logs, and the corrupt backroom dealings in the State Department cables. It wasn’t only the indiscriminate slaughter of civilians, and the US soldiers’ ‘bloodlust’, that concerned him. Bradley had also been ordered by a supervisor to aid Iraqi police in capturing people that he knew were innocent to be tortured and killed.

It was a stirring and history-making defense of whistle-blowing and government transparency. Yet, Bradley also deliberately chose documents he was sure wouldn’t incur harm to the US. Instead, he chose documents that would expose abuses and inform the public, undercutting the Government’s absurd contention that he “aided the enemy.”

Bradley’s attorney David Coombs later explained that, “PFC Manning did not plead guilty pursuant to a “plea bargain” or “plea deal” with the Government. Despite his plea, the Government has indicated it will prosecute PFC Manning on the remaining charges.” So Bradley will still face life in prison during the June 3rd military court martial, but he’ll be able to defend his heroic actions in court, effectively putting our wars and over-classification systems on trial.