please e-mail Defence Minister Stephen Smith (defence.minister@defence.gov.au) asking for exercises to be halted while civilians on the base

Photos of the peace pilgrims inside Shoalwater Bay Military Training Area are being posted online, including of their makeshift camp where they stayed overnight.  They have reported that they heard helicopter and large vehicle movement until the middle of the night. 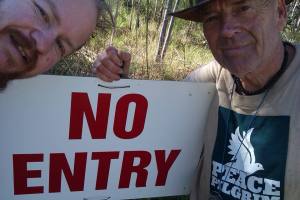 An online campaign has been launched for the exercises to be halted while citizens are on the base.  The campaign has been bolstered by a media release from Greens Senator, Scott Ludlam asking the Defence Department to halt the exercises (Senator Ludlam’s MR: http://bit.ly/19ff0R5). The call is linked with recent media reports that indicate that the four ‘jettisoned’ bombs were dropped on the Great Barrier Reef last week because of the presence of civilian boats inside the military training zone.

Greg Rolles (31yrs), school teacher from Brisbane; and Graham Dunstan (71yrs), retired grey nomad entered the Shoalwater Bay Military Training Area early yesterday morning with an aim to disrupt the exercises.  They cite their opposition to the current wars that Australia has joined the US in as key reasons for their action.

There are currently 28,000 Australian and US troops undertaking joint military training in Australia, with a focus on the Shoalwater Bay Military Training Area.  Last week two US aircraft dropped 4 bombs on the Great Barrier Reef when they were unable to land at their planned location.

Photos are available at www.peaceconvergence.wordpress.com 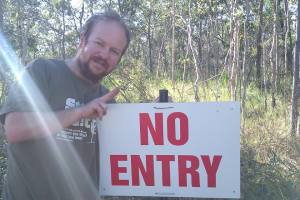