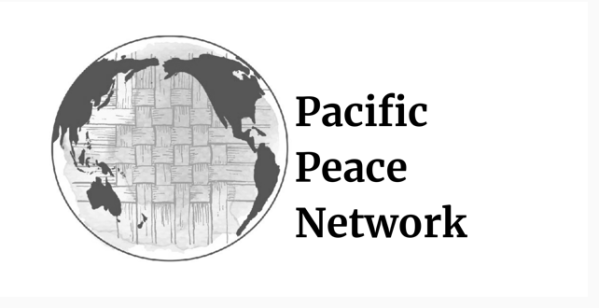 Groups from the Pacific region condemn the recent military exercises in Australia as damaging to the environment, health and peace in the region.

On July 24, at the height of Talisman Sabre, representatives from Pacific nations including Australia, New Zealand, Guahan (Guam), Hawaii (USA), Japan, Rep. of Korea, West Papua and the Philippines called for an end to Talisman Sabre – and all exercises in the Pacific.

Their statements of concern and commitment to collaboration for peace in the Pacific can be heard here.

This year’s exercise marked many firsts, among them:

Annette Brownie Independent and Peaceful Australia Network (IPAN) representative on the Pacific Peace Network said:
“The Pacific Peace Network condemns Talisman Sabre. At this time of global health and climate crisis, there is no justification for ongoing investment in war or increased military activity. We call for the Pacific to be honoured for its name; rather than as a stage for sabre rattling, it should be a region of peace.”

“2021 was a year for many notable firsts for Talisman Sabre. Though smaller in size, the exercise targeted a greater number of defence and non-defence areas and used more lethal firepower than previous exercises. If this is the down- sized version of Talisman Sabre, we are alarmed at what post-pandemic iterations of the exercise might bring.”

“2021 was the first year the ADF did not engage in Public Environment Report (PER) process around the exercise, despite its spread into regional locations and numerous non-defence areas.”

“The ramping up of firepower, the spreading of activity to Queensland’s northernmost region and the increased number of participating nations sends a clear message of U.S. allied strength to China.”

“With tensions mounting in the South China Sea, allied governments may spruik the benefits of interoperability with the U.S.”

“Many of their constituents and people around the Pacific, however, have grave concerns about the increasing presence of U.S. troops and the social and environmental cost of ongoing militarism in the region and want to see these exercises cancelled.”

We, the peoples of the Pacific, aim to create a peaceful, sustainable, and thriving region free of militarism and its negative consequences. We stand in solidarity with each other, empowered by the spirit of our ancestors and as stewards of Moana Nui (the Pacific Ocean). We envision the following:

>> A halt to all military exercises (in land, sea and air) in the Pacific region that
threatens the sustainability of our physical environment;
>> The closure of all foreign military bases, facilities and installations;
>> The clean-up of all toxic military sites that have led to the death of people in
surrounding base communities to cancer and other diseases that result from
exposure to toxic military contamination of lands, territories, and waters;
>> The end to weapons testing in the Pacific, and the increasing weapons sales
through the introduction of new weaponry in the guise of modernizing and
capacitating the military forces of allied countries through the year-round military training and exercise.

Though significantly down-sized due to the Covid pandemic, Talisman Sabre will see 17,000 US and Australian troops engaging in combined land, sea and air manoeuvres inland and along the Queensland coast.  Key components of Talisman Sabre take place at Shoalwater Bay, north of Rockhampton, within the Great Barrier Reef Marine Park.

Environmentalists and peace groups are alarmed at the ongoing use of these environmentally and culturally significant sites for warfare practice.

On June 22, the United Nations World Heritage Committee released a draft report on the state of the Great Barrier Reef announcing that it will recommend that the Great Barrier Reef be listed as “World Heritage in Danger” at its upcoming meeting in China.  The Committee identified the need for greater commitment to “countering the effects of climate change, but also towards accelerating water quality improvement and land management measures.”

Talisman Sabre involves the use of US nuclear-powered and nuclear-weapons capable vessels, the practising of urban warfare, the use of high power sonar, amphibious assaults, parachuting and land force manoeuvres. Live firing, if not explicitly part of the exercise, is likely to occur either before or after the official dates.

These activities are incompatible with protection of the Reef.

This year, the ADF did not engage in a Public Environment Report process and has not publicly released environmental assessment for the areas in which Talisman Sabre will take place It did, however, Defence produced an environmental awareness information video for visiting troops which promotes the military use of the Great Barrier Reef.

The video reminds troops to consider the Reef and not to litter, a far cry from the active environmental management required to protect the vulnerable reef and incongruous with the dramatic messaging around live firing exercises in Shoalwater Bay in early June this year for Exercise Diamond Walk.

The objective of Talisman Sabre is to increase force inter-operability with the US, a military whose environmental footprint cannot be ignored.  The US military is ranked among the world’s worst polluters and is the world’s greatest organisational consumer of oil. It has a legacy of leaving bases contaminated and radioactive. In 2013, the US jettisoned four bombs on the Great Barrier Reef when they had difficulty dropping them on their intended target, Townshend Island. 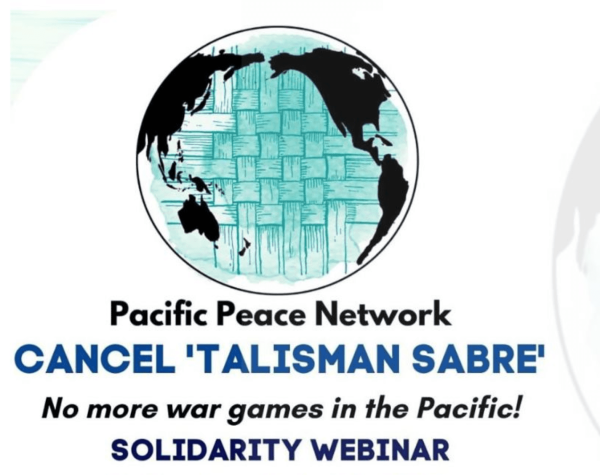 In 2020 activists in the network worked on the campaign to Cancel the Rim of pacific RIMPAC exercises held in the waters around Hawaii.

The webinar held on July 24 brought together speakers of the ‘Blue Pacific’ including representatives from Hawaii, Japan, Philippines, Ghuam, South Korea, New Zealand and Australia.

A Pacific Peace Declaration is currently circulating for endorsements. Please consider adding your name and/or an affiliated organisation.