On Ash Wednesday 2017, members of the Catholic Worker movement removed a sword embedded in a cross at a war memorial in Toowong Cemetery, Brisbane.

Employing blacksmith tools and skills they began the conversion of the sword into a garden hoe, enfleshing the prophecy of Isaiah 2 “they shall beat their swords into ploughshares”.https://tinyurl.com/jkl9c4q

Since their nonviolent anti-war action they have received much vitriol and slander from the state and mainstream media.

Audio interview with Jim Dowling, Catholic Worker, charged with removing a sword from a cross at a war memorial in Brisbane, Australia.

Below is a copy of their media statement:

A group of Christians have this afternoon removed the sword from the crucifix on the war memorial at the gates of Toowong cemetery.

The sword was removed and reshaped by two Christians from the Catholic Worker movement. They claim a sword on the cross is an act of blasphemy.

61 year old Mount Mee resident Jim Dowling removed the metal sword from the cement crucifix; while 22 year old Tim Webb, of Greenslopes, placed the sword on an anvil and reshaped into a garden hoe, echoing the Biblical prophecies of Micah and Isaiah that “They will beat their swords into plowshares and their spears into pruning hooks. Nation will not take up sword against nation, nor will they train for war anymore.”

The group also cited Jesus’ last words to his disciples of “Put away your sword; those who use the sword will die by the sword”, as well as Pope Francis’ New Year’s peace message, which said “the name of God cannot be used to justify violence”. They chose to remove the sword today as it is Ash Wednesday, the first day of Lent.

Jim Dowling said “Lent for Christians is a time for reflection and repentance. It culminates in Good Friday, the remembrance of the crucifixion of Jesus, and Easter Sunday when He rose again. Jesus’ last words to his disciples before he was taken away were “Put away your sword”. For the first three centuries His followers largely obeyed these words and refused to kill their enemies. With the conversion of Emperor Constantine all this changed, and ever since Christians have blessed countless wars, and even lead their own.

“We come here today to repent all wars blessed by the Christian churches. We come to remove the sword from the cross on which our saviour was crucified. We come to beat it into a “ploughshare”, in this case a garden hoe. The ploughshare is a symbol of life. The sword is a symbol of death. We choose life.

“We willingly accept any consequences of this call to repentance, as we remove and convert the blasphemous sword from the cross. We pray that other Christians will join us in recognising our past and present sin in bearing the sword while worshipping the nonviolent Jesus.” 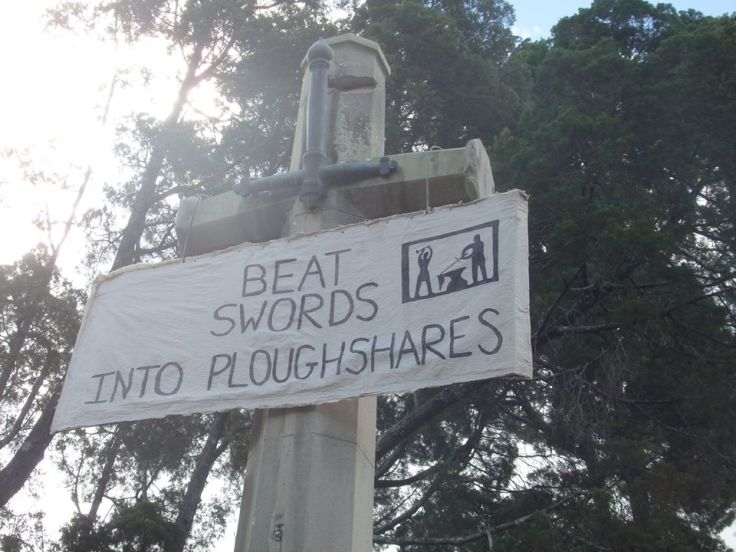