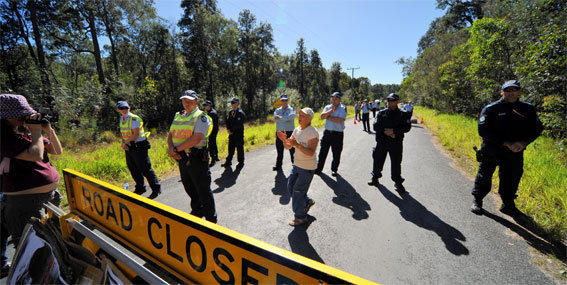 Peace Convergence is a coalition of individuals and diverse peace and justice groups who are opposed to war and war preparations.

Every two years, Australia hosts some of the world’s largest military operations, Exercise Talisman Saber, joint US-AUS combined force training which sees thousands of personnel engaging in land, sea and air manouevers: live firing, bombing practice, the use of sonar, on shore landings – and nuclear powered and nuclear-weapons-capable vessels. With support locations in cities around the country, the majority of the action takes place in Queensland, on and around the Great Barrier Reef, in the Northern Territory and in the Coral, Arafura and Timor Seas. Talisman Saber 2017, set to involved 33,000 personnel, will commence in June with its major live component taking place July 8-25.

“Exercise Talisman Saber is an Australian Defence Force (ADF) and United States (US) Armed Forces combined military training series focused on the planning and conduct of mid-intensity ‘high end’ war fighting. The exercises incorporate land-based, air and maritime activities conducted at various locations within the Northern Territory, Queensland and the Coral, Timor and Arafura Seas. The Exercise is conducted every second year and Exercise Talisman Saber 2017 (TS17) is planned for July and August 2017.” Public Environment Report 2017

Talisman Saber commences around June 20 in NT with Live Exercises in QLD from July 8-25…. with 33,000 US and Aussies troops/personnel expected to be involved in combined force training – using nuclear-powered and nuclear-weapons-capable vessels…

What kind of responses would you like to see to some of the world’s largest military operations taking place in Qld, NT and the Timor, Arafura and Coral Seas?

Join the discussion on the Peace Convergence Group.