More war cries from a dying government. Say no!

As we watch heart breaking stories of Syrian refugees walking to Macedonia, our Prime Minister is gunning to spend more of our tax dollars to bomb Syria. And it won’t stop IS.

Bombing means more civilians die, less of our tax spent on Australians and a step backwards for a peaceful and secure world, all to save Abbott’s sinking ship of a government. What a deadly, self-serving tactic!

So let’s all email bomb his office to show we won’t be silenced. You can still call, but be prepared not to be listened to!

Inside, pilgrims held holy communion, tea and lamingtons and had many conversations with soldiers about the importance of peace and dialogue to solve conflict and war.

Peace Convergence sent a powerful message against Talisman Sabre which included Japanese forces for the first time. We drew attention to its ‘sabre waving’ amidst rising tensions with China, one of Australia’s most important trade partners. Our message saw Tony Abbott MHR react by calling China ‘our friend’ on his visit to Talisman Sabre in Darwin.

Peace Convergence brought together peace activists and groups from all over Australia. We built community. We engaged positively with the Rockhampton community via our community program, which included a flash mob of song during the Riverside music festival and a peace parade.

We beat swords into ‘tea cups’ and ‘hats’ in the media and in the training area!

Peace Convergence is a coalition of individuals and diverse peace and justice groups who share common values:

Talisman Sabre is a joint US-Australian military exercise that takes place every two years in Australia, primarily on the Queensland coast at Shoalwater Bay, north of Rockhampton. It’s the biggest war exercise in the Southern Hemisphere.

Exercises are designed to increase “inter-operability” between the US and Australian forces. This year, Japan & NZ participated. It is a show of US might in the region and Australia’s support for it. It is war making and war preparation, and not a game.

Every two years, people from around Australia make the journey to the Shoalwater region to join the local community in opposing these war rehearsals, as Peace Convergence.  Along with community events and peace pilgrimages into the training area, we run a strong social media and online campaign as well as local, national and international media. Everyone is welcome!

The next Peace Convergence will be in July 2017. Plan a pilgrimage, support activists, come for a day, a week or a fortnight – whatever time you want to give to peace activism.

Come to Rockhampton in the weeks before if you can and help prepare and organise actions.

Be part of the movement by staying connected with us  – sign up here! 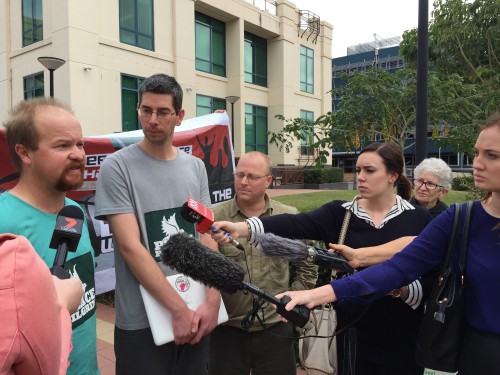